What is the Census?

The 2020 Census counts every person living in the 50 states, District of Columbia, and five U.S. territories. The count is mandated by the Constitution and conducted by the U.S. Census Bureau, a nonpartisan government agency.

The census provides critical data that lawmakers, business owners, teachers, and many others use to provide daily services, products, and support for you and your community. Every year, billions of dollars in federal funding go to hospitals, fire departments, schools, roads, and other resources based on census data.

How is the Census Conducted?

There are three ways that the Census Bureau will initially collect responses from people for the 2020 Census: online, phone and mail.

Starting in May 2020, the Census Bureau will begin following up with homes that have not responded to the census.

If you are filling out the census for your home, you should count everyone who is living there as of April 1, 2020. This includes anyone who is living and sleeping there most of the time: children, adults and the elderly. Roommates count, too!

Get to Know the Census 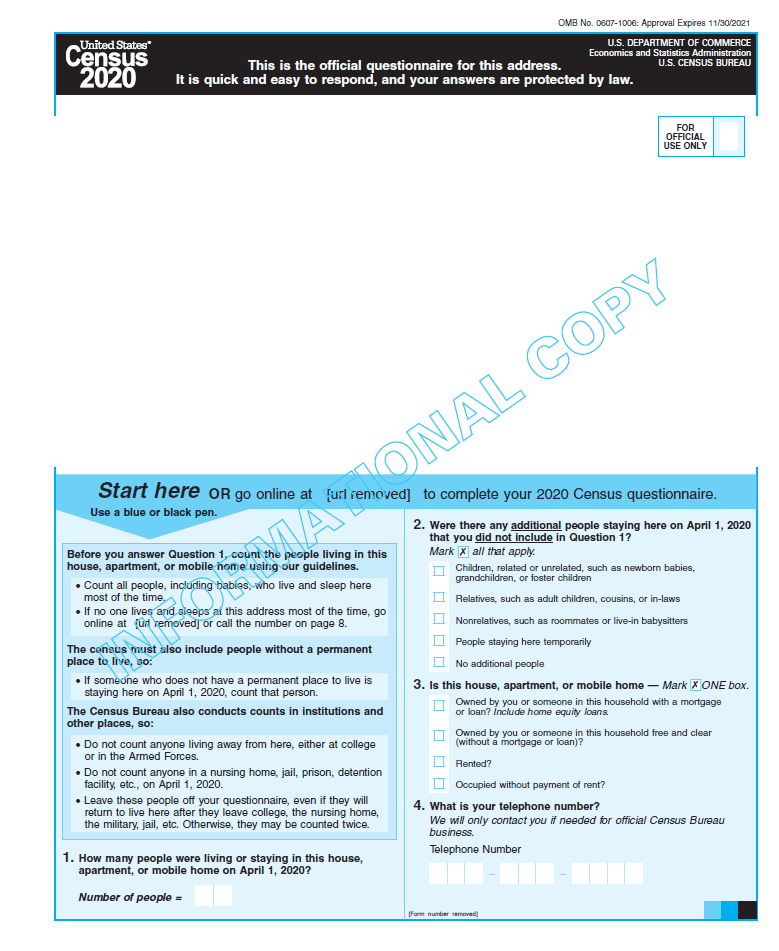 Click the above image to view a sample copy of the 2020 Census.

Please note this is a sample of the paper questionnaire that will be used during the 2020 Census. This version excludes the URL and contact information, and does not count as a completed Census form.

Census Fact: In 2016, NJ received over $22billion through 55 federal programs guided by data derived from the 2010 census. An undercount in 2020 means less funding for the next 10 years.

The Census Bureau is bound by Title 13 of the U.S. Code to keep your information confidential.

Under Title 13,  your private data is protected and that your answers cannot be used against you by any government agency or court. The answers you provide are used only to produce statistics. You are kept anonymous.

Please note, there is no citizenship question on the 2020 Census.

Be Aware of Census Scams

Phishing is a criminal act in which someone tries to get your information by pretending to be an entity that you trust. Phishing emails often direct you to a website that looks real but is fake—and may be infected with malware.

If someone visits your home to collect a response for the 2020 Census, you can do the following to verify their identity:

If you suspect fraud, call (800) 923-8282 to speak with a local Census Bureau representative. If it is determined that the visitor who came to your door does not work for the Census Bureau, please contact the Police Department.