Please register to receive alerts from the Township of Millburn through Swift911: twp.millburn.nj.us/swift911

In light of the ongoing and rapidly changing dynamics of the COVID-19 outbreak, and after much consideration for the welfare of our residents, staff and visitors, we have closed the following buildings to the public as of Tuesday, March 17:

As of March 18, Millburn parks are open ONLY for walking and informal play. To help slow the spread of COVID-19, please practice social distancing by staying at least 6-feet apart when in our parks.

Absolutely NO group gatherings allowed, no use of courts, athletic fields, playgrounds and equipment including picnic tables and benches which may include surfaces that can be infected with COVID-19.

All meetings and activities at the Bauer Community Center and Gero Park Recreation Center are cancelled including all senior programs. Public restrooms in those facilities are closed.

The DPW office is closed to the public. 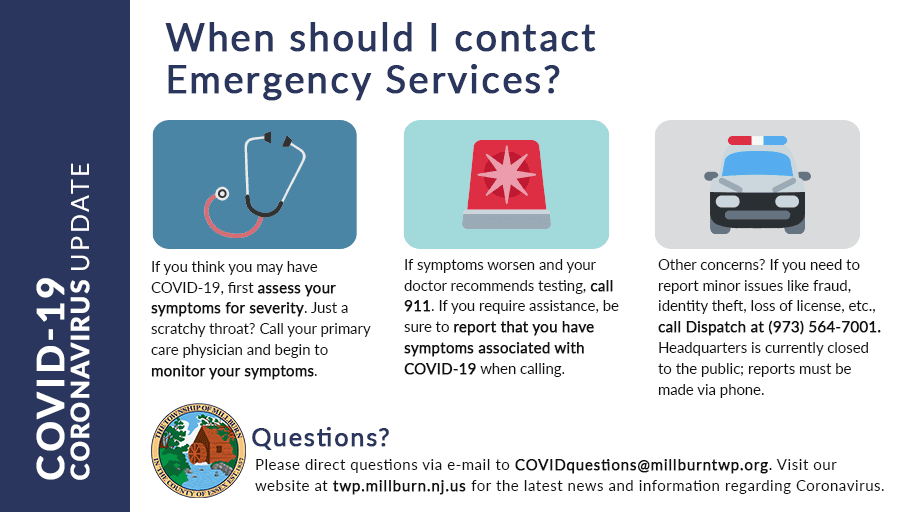 How can I interact with the Township remotely?

Despite closures of our public buildings, residents may remotely utilize a number of public services:

In addition to these services, there are forms on the Departments pages that can be sent in via email or the US Postal Service to conduct business.

For more information on these services and more, please contact customer service at 973-564-7000.

This is a running list that will be updated and modified as programs are canceled and/or postponed.

Due to the current threat presented by the COVID-19 Virus the Millburn Police Department will be instituting the following measures:

A Note on the Be SMART Campaign

The Be SMART Campaign raises awareness about secure gun storage – storing guns locked, unloaded and separate from ammunition – to help save lives.

Residents are urged to securely store firearms in order to keep guns out of the hands of children and teens to prevent unintentional shootings and gun suicides. While responsible gun owners always store their guns locked, unloaded and separately from ammunition, it’s even more important right now with so many students home from school.

As adults, we’re responsible for keeping kids safe. During this public health emergency, our children and teens are spending a lot of time isolated from friends and extended family. Adults should always assume children and teens know where guns are stored, and it is our responsibility to keep them locked, unloaded and separate from ammunition.

Unloaded firearms should be secured with a firearm locking device, such as a jacket or cable lock, or in a locked location, like a safe or lock box. Ammunition should be stored separately from the firearm in a secure location.

An estimated 13 million households with children in the U.S. have at least one gun. Not all of these firearms are stored securely, with approximately 4.6 million children living in a household with at least one gun that is stored loaded and unlocked.

Research indicates that secure gun storage practices, including storing household guns locked, unloaded, and separate from the ammunition, are associated with reduced rates of child firearm suicide. One study showed that households that locked both firearms and ammunition had a 78 percent lower risk of self-inflicted firearm injuries among children and teenagers.